Yesterday Nintendo finally reveiled the controller for their upcomming next generation console, Nintendo Revolution. And I tell ya, this is different. I’ve looked at A LOT of fan mock-ups of the controller and nothing I’ve seen comes close to what Nintendo showed at Tokyo Game Show yesterday. 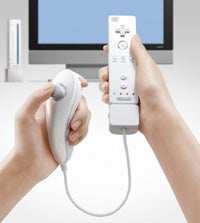 On the DS, Nintendo split the screen in two, with Revolution they’re splitting the controller in two!

You may think “What the fuck are you gonna use this thing for?”, well, imagine a first person shooter game, you could control the player with the left-hand D-pad and aim your gun with the right-hand remote-like controller, you could also use the remote for a flash light.

Satoru Iwata, president of Nintendo, also said, during his keynote at TGS, that the Revolution controller is very expandable, in the back end of the remote you will find a little plug for add-ons. During E3 Iwata said that it will be possible to download old Nintendo games off the web and play them on Revolution, for this, Nintendo will be designing a classic-style controller so that those older games will feel more like playing it on the actual older Nintendo console.

Personally I’m really excited about this new controller, when it comes to real innovation, no one beats Nintendo, after all, they has over 20 years of experience with video games! 😉

IGN has some very good in-depth articles about this new controller, go check ’em out!

Links:
Satoru Iwata’s announcement of the controller at TGS 2005 (Video)

This site uses Akismet to reduce spam. Learn how your comment data is processed.